This oil spill experiment will help you understand the detrimental effects of oil spills to the marine ecosystem. 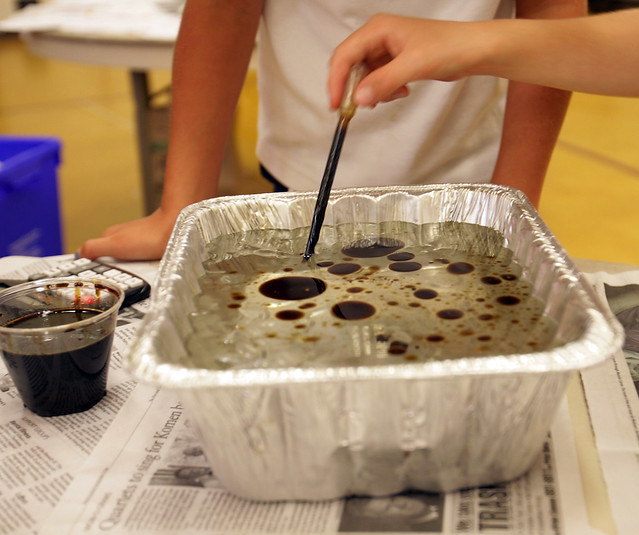 We have all heard about the news on oil spills and the devastating effects of this on Mother Earth and the marine life it supports. But we, who do not get to witness these effects on a first hand basis, do not understand the degree of impact of such incidents.

In this experiment, you will be mimicking an oil spill to demonstrate the impact of this on ocean life. You will need:

Get the large glass jar and half fill it with distilled water. Add the food colouring, preferably blue to mimic the colour of the ocean, and stir thoroughly to disperse the colouring. Put your marine life bath toys into the jar and let them float freely. These will mimic the marine life living in the ocean. The next step is to pour cooking oil into the jar, avoiding the marine life bath toys. Observe what happens. Move the jar in a swirling motion, as if there are waves in your ocean. Observe what happens.

Notice that when you poured the cooking oil into your ocean, the oil started to gather on the surface of the water because it is less dense than ordinary water. It does not mix in with the water unlike the food colouring you added earlier on because the water molecules are more attracted to each other than they are to the molecules of the oil. This is also the reason why, no matter how hard you stir or try to mix oil and water, it simply does not work.

Now, let us pay attention to your marine life bath toys. What did you notice? The rubber toys were easily coated by the oil, all around, especially when you made waves by swirling the jar. Can you imagine how terrible this would be in the case of real animals? When marine animals swim to the surface of the ocean to catch some air, they will instantly be coated by the toxic oil and it will eventually damage their health.

Oil spills are products of human mistakes and carelessness. Usually oil spills happen when ships carrying large oil tanks sink in the ocean, causing the oil to leak out of its containers and contaminate the ocean, killing thousands of marine lives.

When this happens, people should take responsibility and take actions to clean up the ocean to minimize its deadly effects to the marine life. Oil spill clean ups may cost a lot. And it may also take a long time before oil is removed from the ocean.