With this "Making-a-Rainbow"-Experiment, you'll be able to understand how rainbows are formed because you are going to make one yourself. 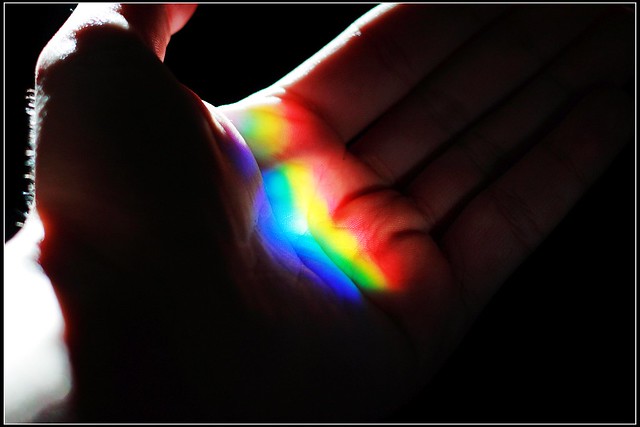 Rainbows are undeniably adorable and just amazing to look at, especially for kids. Seeing the 7-band coloured arc in the sky makes them wonder how it was formed and what caused it to look that way.

To create your own rainbow, you will need the following materials:

Position your glass of water on a table and then place the mirror inside it at an angle. Make sure that the room is completely dark. Close all the curtains and the blinds so it gets pitch dark. Take the flashlight or your torch and aim the light towards the mirror that you placed inside the glass. Watch a rainbow appear from the angle of your mirror. Adjust the angle of the mirror as you wish!

You have just made your own rainbow, but do you know the explanation behind your creation? A rainbow is an optical phenomenon that appears as a band of colours in an arc, resulting from the refraction of the sun's light rays by the rain. When the sun shines on the droplets of water in the atmosphere, a rainbow, as people see it, is formed.

A rainbow displays the colours red, orange, yellow, green, blue, indigo and violet in respective order. Its formation can be caused by other things as well just like mist, dew and spray. To explain it further, when light strikes the surface of a water drop, it changes speed thus causing it to bend. It is refracted as it enters the water and then refracts again as it leaves the droplet. The outcome is light being reflected in varying angles, creating a rainbow.

Light travels in varying waves where the length of each would depend upon the colour. When light retracts, the different colours refract and bend in different amounts as well. This is the reason why we see different colours in a spectrum when there is a rainbow.