The astrolabe is an ancient device, long used to measure latitude and act as an aid to navigation. Historians believe that the first astrolabes were devised by the Ancient Greeks, with astronomers such as Apollonius (c. 262 BCE – c. 190 BCE) and Hipparchus (190 BCE – c. 120 BCE) developing the theory behind the device. 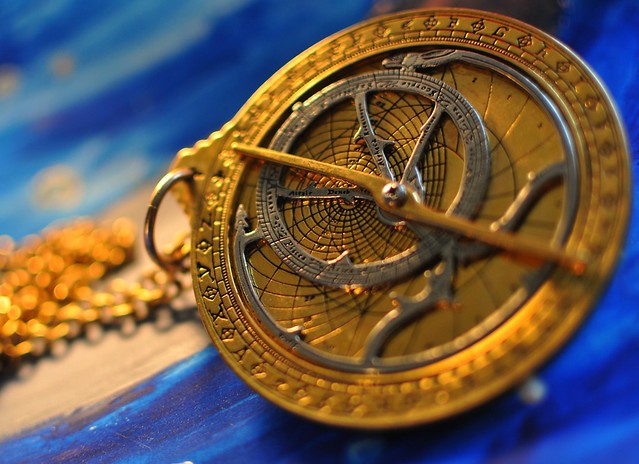 Although there is a lot of debate about who built the first astrolabe, the consensus is that Hipparchus has that honor, using it as a much more accurate way of measuring latitude than a gnomon.

The astrolabe is an instrument that allows observers to measure the position of celestial bodies relative to the horizon, which allows accurate star mapping. The utility of the instrument does not end there, because it can be used to measure latitude, give the local time and estimate the height of objects; astrolabes were used by surveyors for measuring distance through triangulation. The standard astrolabe consists of a disc with a rotating arm complete with sights, but quadrants, sextants and inclinometers all use the same principle.

Build a Clinometer – a Simple Astrolabe

With a few simple items, you can build your own simple astrolabe and start to chart the motion of the stars. This particular version is usually referred to as a clinometer or inclinometer, and can also be used to measure height using trigonometry. Foresters often use clinometers to measure the height of trees and this device can measure latitude from the star Polaris, although navigators and astronomers use much more complex instruments.

To build the protractor:

Of course, this is a very simple astrolabe, and ancient astronomers and mariners used much more elaborate devices, usually disc or wheel shaped, and often engraved with the positions of the stars. Even in the modern world, aircraft use inclinometers to measure banking angle, showing that the knowledge of the ancients still touches modern life in many ways.