What is the Scientific Method?

Since the 17th century, the scientific method has been the gold standard for investigating the natural world. It is how scientists correctly arrive at new knowledge, and update their previous knowledge. It consists of systematic observation, measurement, experiment, and the formulation of questions or hypotheses.

What is the Scientific Method? 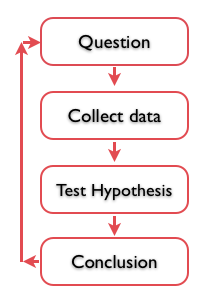 What is the best way to uncover objective truths about the world we live in?

Why do we accept some ideas as objective fact while others are more up for debate?

The answer is the scientific method.

Imagine that you are living in the 1600s, and wonder why you sometimes see maggots in decaying food. Where do they come from?

You may ask around and discover that the experts of the day believe living organisms sometimes emerge from inanimate materials. In fact, this theory, called “spontaneous generation", was popular for around 2000 years, and famously expounded by Aristotle. However, it was wrong.

It was not till 1859 that Louis Pasteur’s important experiment disproved this theory and paved the way for a better one, the theory of “biogenesis", which is still subscribed to today.

Simply making an observation and formulating a possible explanation is not scientific.

Instead, the scientific method is a comprehensive process that ensures that scientists have the best chance of arriving at the objective truth about a phenomenon. Pasteur had a question, formulated a hypothesis, devised a sound experiment to test it, then applied logic to interpret his results.

How do you know that the sky is blue?

Because you can see it!

Observation is humankind’s most natural method of gathering data about the world, and we do this via sensory experience, for example sight.

Empirical observation is the gathering of data using only information that is directly or indirectly available to our senses.

Empirical observation is the foundation of any experiment, and so forms a crucial part of the scientific method.

What characterizes empirical evidence is that it uses objective observable data, as opposed to opinion or anecdote, to concisely answer a research question. Empirical evidence is always the same, regardless of who the observer is. For example, anybody can look at a thermometer and observe that it reads 10 °C, but many different observers may stand in a room and claim it’s “very cold" or “only somewhat cold." The former is an empirical observation, the latter is simply opinion.

Science relies heavily on observation and measurement, and the vast majority of research involves some type of practical experimentation.

This can be anything from measuring the Doppler Shift of a distant galaxy to handing out questionnaires in a shopping center and observing the kinds of responses you get.

The kind of knowledge you arrive at this way is termed a posteriori, meaning it’s gained after experience.

In contrast, a different kind of knowledge is a priori, which means it comes before, or independent of any observation.

The rationalist approach to gathering knowledge says that truth can be found by reasoning and argument alone.

Such knowledge is inductive and developed from first principles. Though this approach to gaining knowledge is invaluable, it is empirical research and the rigors of the scientific method that are most expected in true scientific research.

The scientific method doesn’t end after the results are obtained. Collecting, analyzing, interpreting and integrating data is part of the process.

In other words, how can the findings be related to what is already known?

The logic behind research design is the framework that allows us to make meaning of the results we’ve observed. Scientists must pay careful attention to the reasoning behind their methods if they wish to make meaningful analyses of results. There are two main methods of reasoning:

Deductive: Ending up at a conclusion based on the inherent logic of an argument. Moves from the more general to the more specific.

Inductive: Ending up at a conclusion based on a set of observations. The conclusion can be either more or less probable, based on the strength of the evidence. More evidence can always be gathered. Moves from the more specific to the more general.

You may notice that the first corresponds to a rational approach, and the second to an empirical approach.

Consider another example. When Sherlock Holmes gathers clues about a mystery, he may form a theory about what happened. Though he can never prove his theory, the more clues he has and the stronger his evidence, the more probable his theory is likely to be. He is using inductive reasoning.

Now, because scientific research favors empirical evidence and the scientific method, it also favors inductive reasoning. This means that whenever research is conducted, it never proves or disproves something once and for all, but only adds evidence in support of an inductive argument. The stronger our specific evidence, the stronger generalizations we can make.

This process of induction and generalization allows scientists to make predictions about how they think that something should behave, and design an experiment to test it.

The Scientific Method Relies on Data

The scientific method formalizes its observation by taking measurements, analyzing the results, then feeding these findings back into theories of what we know about the world. There are two major kinds of data: quantitative and qualitative.

Quantitative data measures an aspect of the real world in quantifiable terms, i.e. numbers. Qualitative data observes the qualities of natural phenomena, such as opinions and motivations.

For example, opinions about the beauty of a particular human face is qualitative data, while data about the distance in millimeters between various facial features is quantitative.

Quantitative measurements are generally associated with what are known as ‘hard' sciences, such as physics, chemistry and astronomy. They can be gained through experimentation or through observation.

As a rule of thumb, a quantitative measurement usually has an SI or SI derived unit. Percentages and numbers fall into this category.

Qualitative measurements are more associated with ‘softer’ or social sciences. However, such data can undergo numerical manipulation or scaling to transform it into quantitative data.

As an example, a social scientist may open-endedly interview drug addicts in a series of case studies to give a deeper understanding of their day to day lives. The data gathered gives a richer knowledge of the aspects of drug use that numbers may not be able to capture.

However, if the social scientist performs some sort of manipulation on this data, such as devising a numerical scale to assess pessimism via response to specific questions, then he generates quantitative results.

Measuring anxiety, preference, pain and aggression on scales are some examples of qualitative concepts measured quantitatively.

A medical researcher might design experiments to test the effectiveness of a drug, using a placebo to contrast. However, she might also perform in depth case studies on a few of the subjects to assess their personal experiences taking the medication.

Scientists are conservative in how they approach results and they are naturally skeptical.

It takes more than one experiment to change the way they think, however convincing the headlines are, and any results must be retested and repeated until a solid body of evidence is built up. This process ensures that researchers do not make mistakes or purposefully manipulate evidence.

Over time, the scientific method can improve on even the most accepted theories, or bring into being completely new ones. This is called a paradigm shift, and is an integral part of the scientific method. Most groundbreaking research, such as Einstein's Relativity or Mendel's Genetics, causes a titanic shift in the prevailing scientific thought.

The scientific method has evolved, over many centuries, to ensure that scientists make meaningful discoveries, founded upon logical hypotheses that can be tested empirically.

The exact process varies between scientific disciplines, but they all follow the above principle of observe - predict - test - generalize.

Apart from a few strictly defined physical sciences, most scientific disciplines have to bend and adapt these rules, especially sciences involving the unpredictability of natural organisms and humans.

Any scientist should have a good understanding of the underlying principles. If you are going to bend and adapt the rules, you need to understand the rules in the first place.

« Previous Article
"What is Research?"
Back to Overview
"Research Basics"
Next Article »
"Empirical Research"
Full reference: