Psychology in the Middle Ages

Part V - Early Renaissance and Aquinas - The Culture of Learning

Part V - Early Renaissance and Aquinas - The Culture of Learning

During the 8th Century, the 8th Century saw a revival of learning, as Charlemagne and the Carolingian Dynasty provided the stability for educational institutions to flourish. Although this empire was fairly short-lived, it provided a foundation for the Early European Renaissance of the 12th Century, when scholars such as Thomas Aquinas began to study metaphysics and the mind. 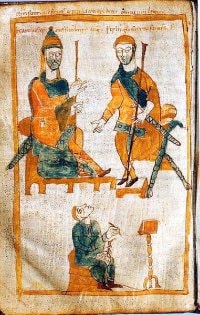 It is tempting to assume that, after Augustine and until the Renaissance, little progress at all was made and society became dominated by the illiterate, and there is certainly some truth in that outlook. However, two brief periods of enlightenment occurred, namely the Carolingian Renaissance of the Late 8th and Early 9th Centuries, and the First Renaissance of the 12th Century.

The Caroligian Dynasty, spanning the reigns of Charlemagne and Louis the Pious, saw an increase in the number of schools as the rulers tried to improve literacy. This period saw a revival in classical knowledge, art, and architecture, as esteemed scholars underpinned a cultural and societal revival.

Huge schools, attached to monasteries and cathedrals developed, under the auspices of the Carolingian dynasty, and the work of the Roman authors was again taught. Grammar, rhetoric and logic, were taught alongside arithmetic, geometry and music, in great schools such as Chartres, Orleans, and Auxerre. This period certainly enriched western civilization, although the effects were short-lived and restricted to the clergy and nobility. However, the development of schools, curricula, and a standardized form of Latin remained.

When the Carolingian Empire declined, at the end of the 9th Century, feudalism again emerged, dominated by nobility interested only in using the church for an outward show of power. This included the Crusades, which although brutal and intended as little more than a land-grab, started the flow of ideas from Islamic and Byzantine lands into Europe. The Knights of St. John and the Knights Hospitalers also established centers for healing sick pilgrims, including the mentally ill.

This influx of ideas began to shape thought, as scholars again began to explore the mind, building upon the work of the Greeks, Romans, and Arabs. Foremost amongst these was Thomas Aquinas, a polymath who explored the mind and body.

The culture of learning was reestablished in Europe in the 11th Century, under the auspices of monasteries. The First European Renaissance, of the 12th Century saw European society start to climb out of its mentality of despair, as society and the economy started to improve. Unlike the earlier Carolingian Renaissance, which was largely limited to the upper echelons of society, this Renaissance was inclusive, driving cultural and societal changes that would underpin the later Renaissance.

Minds such as William Conches (1090-1154), with an interest in anatomy, especially the brain, and Bishop John of Salisbury and John of Bloise were fascinated by medicine. Hildegard of Bingen wrote a number of medical books, and she touched upon the notion of insanity and mental illness, describing them via the four humors, as with the Roman thinkers.

Thomas Aquinas (1225-1274), influential in so many areas of learning, including philosophy, theology, and natural science, blended Judeo-Christian ideas with the rediscovered knowledge of the Ancient Greeks that arrived in Europe via Arabic translations. In His De Anima, he noted some beliefs about the mind, believing it to be divided into

He did also believe in the influence of the supernatural and astrology, but such beliefs were not uncommon.

Like most classical scholars, he divided mental illness into melancholia, mania, and depression, and he believed that pleasure, sexuality, and seeking pleasure were distinct aspects of the human personality. He also believed that intellect and reasoning had to be pure and unblemished, as a divine aspect in humanity, so mental diseases had to have a somatic disorder one founded in underlying problems with the body.