After a long day at work or school, you finally get into a coffee shop and order a cup of coffee and some cinnamon rolls. You notice the aroma of the coffee and the sweet scent of the cinnamon rolls, and feel relaxed in an instant. This is how your sense of smell works – the airborne chemicals of the food stimulate your sensory receptors that correspond to the sense of smell.

The smell sensory receptors are found in a tissue in the nasal cavity called the olfactory epithelium. This patch of tissue is comprised of three types of cells:

Cilia are hair-like protuberances that are necessary for processing molecules that we smell, also known as "odorant molecules". The cilia of sensory neurons are covered with mucus where the odorant molecules are dissolved. Once dissolved, the molecules undergo a binding process which activate the G protein in the sensory receptor. When G protein is activated, the enzyme on the cilia begins to work by catalyzing the conversion of ATP (cell energy). This leads to the sodium (Na+) electrolytes to enter the cell. Once there's an influx of sodium, the plasma membrane's potential is continuously reduced, a process called depolarization. When the depolarization of the plasma membrane reaches its limit or threshold, an action potential is generated.

The action potential is then transferred by the olfactory nerve to the brain. The brain processes the action potential as a sensory information, and once the brain is done evaluating it, a normal person would be able to recognize and perceive the particular odor. 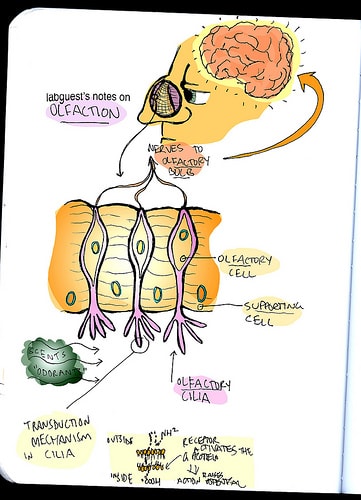 There are thousands of odors around us, yet our sense of smell only includes one kind of cell. How can we differentiate one odor from another then? Many scientists agree that each olfactory receptor is able to bind to different kinds of odorants according the odorant chemicals' intensity. For example:

The brain will interpret these as two different odors, and would normally correspond to one being the coffee, and the other being the cinnamon.