Controlled variables are variables that is sometimes overlooked by researchers, but it is usually far more important than the dependent or independent variables.

A failure to isolate the controlled variables, in any experimental design, will seriously compromise the internal validity. This oversight may lead to confounding variables ruining the experiment, wasting time and resources, and damaging the researcher's reputation.

A failure to isolate the controlled variables will compromise the internal validity.

Most experimental designs measures only one or two variables at a time. Any other factor, which could potentially influence the results, must be correctly controlled. Its effect upon the results must be standardized, or eliminated, exerting the same influence upon the different sample groups.

For example, if you were comparing cleaning products, the brand of cleaning product would be the only independent variable measured. The level of dirt and soiling, the type of dirt or stain, the temperature of the water and the time of the cleaning cycle are just some of the variables that must be the same between experiments. Failure to standardize even one of these controlled variables could cause a confounding variable and invalidate the results. 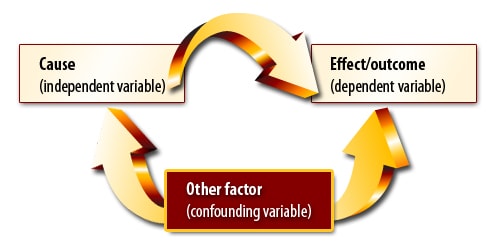 In many fields of science, especially biology and behavioral sciences, it is very difficult to ensure complete control, as there is a lot of scope for small variations.

Biological processes are subject to natural fluctuations and chaotic rhythms. The key is to use established operationalization techniques, such as randomization and double blind experiments. These techniques will control and isolate these variables, as much as possible. If this proves difficult, a control group is used, which will give a baseline measurement for the unknown variables.

Sound statistical analysis will then eliminate these fluctuations from the results. Most statistical tests have a certain error margin built in, and repetition and large sample groups will eradicate the unknown variables.

There still needs to be constant monitoring and checks, but due diligence will ensure that the experiment is as accurate as is possible.

The Value of Consistency

Controlled variables are often referred to as constants, or constant variables.

It is important to ensure that all these possible variables are isolated, because a type III error may occur if an unknown factor influences the dependent variable. This is where the null hypothesis is correctly rejected, but for the wrong reason.

In addition, inadequate monitoring of controlled variables is one of the most common causes of researchers wrongly assuming that a correlation leads to causality.

Controlled variables are the road to failure in an experimental design, if not identified and eliminated. Designing the experiment with controls in mind is often more crucial than determining the independent variable.

Poor controls can lead to confounding variables, and will damage the internal validity of the experiment.