The repeated measures design is a stalwart of scientific research, and offers a less unwieldy way of comparing the effects of treatments upon participants.

What is a Repeated Studies Design?

The repeated measures design uses the same subjects with every condition of the research, including the control.

This requires fewer participants and resources and also decreases the effects of natural variation between individuals upon the results. Repeated subject designs are commonly used in longitudinal studies, over the long term, and in educational tests where it is important to ensure that variability is low.

Repeated subjects designs do have a couple of disadvantages, mainly that the subjects can become better at a task over time, known as practice effects or, conversely, they become worse through boredom and fatigue. In addition, if some of the subjects pull out before completing the second part, this can result in a sample group too small to have any statistical significance. 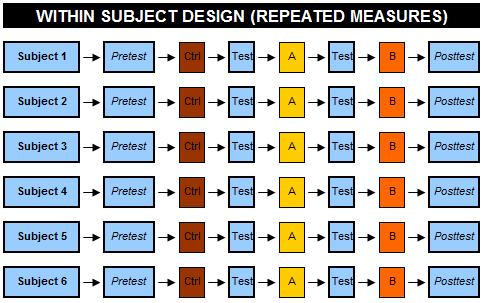 The crossover design is, by far, the most common type of repeated measures design, based around ensuring that all of the subjects receive all of the treatments. 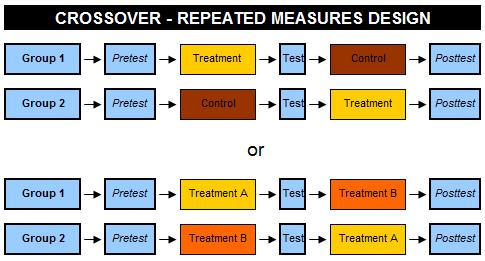 Like all repeated measures designs, this reduces the chance of variation between individuals skewing the results and also requires a smaller group of subjects. It also reduces the chance of practice or fatigue effects influencing the results because, presumably, it will be the same for both groups and can be removed by statistical tests. The major pitfall is if the carryover effects are asymmetrical, if B affects A more than A affects B, for example.

The main weakness of a crossover study is the possibility of carryover effects, where administration of the first condition affects the results gained in the second. For example, imagine medical researchers testing the effects of two drugs upon asthma sufferers. There is a chance that the first drug may remain in the subject's system and affect the results of the second, one of the reasons why medical researchers usually leave a 'washout' period between treatments.

In addition, crossover studies suffer badly if there is a high dropout rate amongst participants, which can adversely affect the validity by unbalancing the groups and reducing the statistical validity. Despite this, crossover studies remain the most common repeated measures design, due to the ease and practicality.